Congress first created the Medicare hospice benefit in 1982. During the first full year after the law went into effect, only 200 Medicare patients enrolled in hospice, accounting for less than one-half percent of the deaths that year. By 1986, seven percent of Medicare patients who died were enrolled in hospice at the time of death; in 1998, it was 19 percent and in 2013 it reached 47 percent. A new report from the National Hospice and Palliative Care Organization shows this percentage has remained fairly stable: in 2017, it was 48 percent.

The length of time that Medicare patients are actually enrolled in hospice remains woefully short, particularly for some diagnoses: while the average length of stay is 71 days, reflected a few very long stay patients, the median length of stay is only 24 days. In fact, fully 28 percent of individuals got between one and seven days of care, far less than most clinicians regard as optimal. Patients enrolled in hospice because of a cancer diagnosis tended to have the shortest lengths of stay in the program. Nonetheless, the historical shift towards hospice as a reputable and popular approach to end of life care demonstrates that we can introduce a new Medicare benefit package and expect it to catch on. The same happened with Medicare Part D, the drug benefit (though this was an add-on rather than a substitution), with enrollment going from 52 percent in 2006 to 71 percent in 2016. Medicare Part C, the partially privatized HMO-style benefit now known as Medicare Advantage, has also taken off: in 2003, only 13 percent of Medicare beneficiaries opted for such a plan but by 2017, 33 percent did. 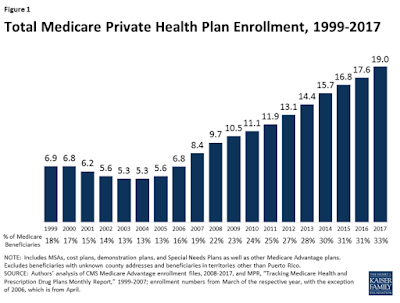 The time is ripe for adding a new alternative benefit package to Medicare’s offering: whether we call it Medicaring, the name preferred by Joanne Lynn, Director of the Elder Care and Advanced Illness division of the Altarum Institute,
or Intermediate Care, my term, or something else, it would provide enhanced home care services for frail elders and others with advanced illness in exchange for limitations on access to intensive, expensive, burdensome, and seldom beneficial treatments such as bone marrow transplantation or open-heart surgery.

Americans tend to dislike or at least be very skeptical about any kind of limits to care. But often the problem is that we focus on what people cannot have rather than emphasizing what they can have—and what they often need and want. In fact, I think one reason that patients only enroll in hospice very late in the course of their illness is that hospice is presented as the withdrawal of care, the discontinuation of care, rather than as the substitution of one approach to care for another. Many patients may be unwilling to forgo treatment altogether, which is how hospice is frequently presented, but are eager to choose a less invasive, less burdensome form of care: infusions of very toxic chemotherapy drugs in the physician’s office every week or two may be rejected if there is an oral medication they can take at home that has far fewer side effects. But if the only alternative is certain death, chemotherapy looks far more attractive.

Important and interesting work has been done on developing and implementing programs to care for people with advanced illness or frailty, such as the Coalition to Transform Advanced Illness Care's 2017 report. The way forward is now to create a Medicare benefit to accommodate this approach.
Posted by Muriel Gillick at 2:08 PM No comments:

The Veterans Health Administration, as its website reminds us, is the largest integrated health care system in the US, where “integrated” is a contemporary buzzword in health care. It denotes coordination across many sites and implies a focus on populations, not just individuals, both of which are generally viewed as essential features of a good health care system—and which are widely lacking in the US. The VA, as it is known, provides care to 9 million people at 170 medical centers and over 1,000 outpatient sites. It is also the only form of socialized medicine in the United States: the federal government does not just provide health insurance (as is the case with Medicare); it employs the physicians, nurses, administrators, and others who actually provide medical care. Not surprisingly, the VA is under threat from the current administration, despite its popularity with veterans and the organizations that represent them.

The goal of the current administration is to privatize the VA, and arguably the real reason the Secretary of Veterans Affairs was summarily fired is that he wasn’t moving rapidly enough in that direction. At issue may not be money—Trump’s proposed 2019 budget for the VA would be nearly $200 billion, or a 12 percent increase over the current year. Rather, the main concern is ideological—getting government out of health care. My question is: what would that mean for older people, many of whom receive VA benefits?

In many respects, the VA provides excellent care for older veterans. It has a long history of innovation in the geriatric realm: it has for years had a network of Geriatric Research and Clinical Education Centers (GRECC) that carry out research and provide clinical care to older people. Its Geriatric Evaluation and Management Units (GEMU) that offer inpatient geriatric assessment have been shown to slow the rate of functional decline compared to standard care. The VA has a model Extended Care program that provides room, board, and medical care to veterans needing long term care. And in recent years, it has developed an innovative home visit program for its neediest members. Are all these programs a fluke?

To understand, we need a little perspective. The VA health system was created by Congress in the immediate aftermath of World War II. It had several missions including: improving the health and function of US veterans, providing education and training to medical students and residents, and conducting research. But for many years, it was the poor stepchild of the federal government. The Secretary of Veterans Affairs did not become a cabinet level position until 1989. The system became known for inefficiency and mediocrity. But then in 1994, then Under Secretary for Health in the VA John Kizer initiated a radical transformation of the VA system. He created a new system of regional integrated service networks. He developed and implemented a system of quality indicators to drive improved performance.

The transformation worked. A 2007 study published in the Milbank Quarterly looked at performance over the 1998-2005 period and found that the VA outperformed traditional Medicare, Medicaid, and the private sector on a variety of indices. 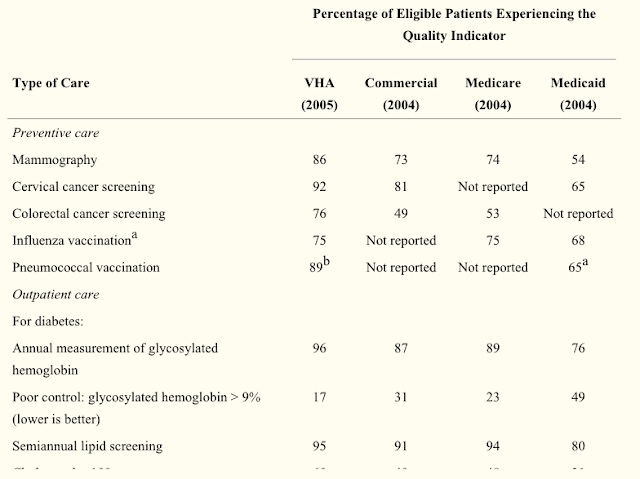 A RAND study published in 2016 examined the period from 2005 to 2015 and again found that the VA performance was comparable to or superior to standard American health care in most domains.

But there were cracks in the system. By 2014, those cracks split wide open, and a scandal over long wait times—and a cover-up to conceal the problem—erupted. As Kizer himself, the mover and shaker of the earlier reforms, argued in a New England Journal of Medicine essay in 2014 written with health policy expert Ashish Jha, the reforms have become unfocused and the bureaucracy bloated. The original idea of using quality indicators had mushroomed until there were so many indicators that both administrators and physicians were paralyzed; the earlier regionalization and centralization of the VA system, while effective managerially, had led to excess insularity of the entire system from new developments in the private sector (many of which may have taken their inspiration from the VA in the first place!)

The solution they proposed was to fix those problems, not to outsource VA care to the private sector. Firing Secretary Shulkin, who by all accounts was a very competent and visionary leader, and replacing him with the president’s personal physician, Ronny Jackson who has no experience managing a large organization (let alone one as complex and needy of reform as the VA), is a classic case of throwing out the baby with the bathwater.
Posted by Muriel Gillick at 8:46 AM No comments: