The May issue of the health policy journal, Health Affairs, includes a short but important article by two researchers from Harvard’s Joint Center for Housing Studies. Its title poses the central question of their essay, “what can be done to better support older adults to age successfully in their homes and communities?” They begin with the observation that most of the literature on “supportive housing” for older people focuses on the 20 percent of people over 75 who need significant help to function day to day (many of whom are in fact over 85). They go on to point out that the remaining 80 percent face challenges as well—mobility limitations, impaired night vision—that while not nearly as restrictive as the problems of their counterparts with frailty or dementia, are nonetheless important issues that are seldom addressed from a public policy perspective. And with the over 75-year-olds numbering 14 million today and expected to double by 2038, 80 percent represents a great many people whose housing needs are projected to be inadequate.
In fact, while the vast majority of older people say, when surveyed, that they want to stay in whatever home they live in now, that may prove difficult at best. Consider the major threat to successful independent living, impaired mobility. Only 3.5 percent of homes today offer single floor living with no steps to the entrance. Many do not have hallways that are wide enough to comfortably accommodate assistive devices. Retrofitting a two-story home with a curving staircase—and, let’s say, no first-floor bathroom or bedroom—may be prohibitively expensive or impossible altogether. Then there’s transportation from the older person’s home to stores, libraries, doctor’s offices, or movie theaters which, in many rural or suburban locations, is nonexistent.
What Christopher Herbert and Jennifer Molinsky advocate in their article is a variety of public policy steps to help. They mention tax credits for renovations and programs that provide coordination of care, perhaps modeled on PACE (program of all-inclusive care for the elderly), though that is currently based in adult day health centers and is more suitable for the frail than for the slightly impaired. They allude to NORCs (naturally occurring retirement communities) without mentioning them by name as a model that facilitates on-site assistance by concentrating a large group of people in one area.
But in the end, the authors are forced to make an appeal for building new accessible, multifamily buildings with elevators in walkable urban centers. And it’s not just urban planners—if cities still hire such people—who need to push for this model; it’s also older people themselves. A good place to start is to educate people as they turn seventy and older that they may want to think about the long run and move before they are forced to. They should choose a housing arrangement, if they can afford to, where they can truly age in place.

https://
Posted by Muriel Gillick at 6:30 PM No comments:

As soon as I walked into Mrs. L’s room, I knew something was wrong. She was sitting quietly in her wheelchair, her head bowed; her back was towards me, towards the door, towards the world of the nursing home which, for the past year, had been her world and where I was a volunteer. I walked over to her and greeted her, gently resting my hand on her shoulder, and saw her face was contorted into a grimace. I asked her what was the matter and she said, her voice almost inaudible, that she had to go to the bathroom.
That seemed like an easy enough problem to solve. I went to the nurse’s station, a few steps from Mrs. L’s room, and found two nursing assistants chatting so I let them know that Mrs. L. needed help going to the bathroom. “Her roommate is in the bathroom; she has to wait,” I was told. I returned to Mrs. L’s room, gave her an update, and tried to distract her. I asked her about her plans for Mother’s Day, I commented on the trees that were flowering outside. Ten minutes passed. Fifteen minutes passed. The roommate was still in their shared bathroom. Mrs. L. began to moan softly.
I went back to the nurse’s station. This time I found a nurse and asked her if she was in charge.  She hedged, saying she was taking care of some of the residents. As it turned out, Mrs. L. was one of “hers.” I explained the situation, indicating that Mrs. L. had been waiting at least fifteen minutes—I wasn’t sure how long she had been waiting before my arrival. “Well,” the nurse explained, “she has to wait. Her bathroom has a raised toilet seat adjusted for her, so she has to use her own bathroom.”
No doubt a raised toilet seat is helpful. But nursing home residents do sometimes leave the nursing home. They visit their relatives and use their bathrooms. They go to restaurants and use the public bathrooms. A raised toilet seat is desirable but not essential.
I asked about alternatives, given that Mrs. L’s bathroom of choice was occupied. There were, after all, many other bathrooms on the same floor: there was a staff bathroom, there was a public bathroom and, if necessary, there were the other residents’ bathrooms. Mrs. L’s section of the nursing home must have had at least ten bathrooms. And her “unit” was one of four on the same floor, each of which had another ten bathrooms.
No, the nurse explained. For “infection control” reasons, Mrs. L could not use any of those other 39 bathrooms.
I was incredulous. Mrs. L. was some sort of Typhoid Mary? A danger to the public health?
There are, to be sure, situations in which hospital patients or nursing home residents harbor highly infectious agents and are on “contact precautions.” But Mrs. L. had no such infection. She was not subject to such measures.
I tried one last time. Surely, I indicated, there must be some sort of backup plan if the desired bathroom was unavailable. No, I was informed. The nursing home had no backup plan. Mrs. L. would have to wait.
Really? How long a wait was acceptable? Half an hour? An hour? What if the plumbing was out of order?
I waited with Mrs. L. After twenty-five minutes (plus whatever time she had waited before my arrival), the roommate emerged from the bathroom. I informed the nursing assistants, who were still sitting at the nurse’s station, that the bathroom was now available, and Mrs. L. was taken to the bathroom.
To Mrs. L., this treatment felt like punishment. It felt like an arbitrary exercise of control by the powerful over the powerless. To me, it sounded like adherence to rules intended to promote the health and safety of the residents but designed for the convenience of staff, rules that were enforced without creativity, flexibility, or compassion.
Treating frail, vulnerable older nursing home residents with dignity is not a new challenge Since Mary Mendelson wrote the muckraking “Tender Loving Greed” in 1974 and Robert Butler received a Pulitzer Prize for “Why Survive? Being Old in America,” published in 1976, nursing homes have been criticized for failing to treat residents with dignity and respect. But we have come a long way since the 1970s. The Nursing Home Reform Act (OBRA ’87) promulgated a “Bill of Rights” for nursing home residents that guaranteed the right to privacy and to being treated with dignity. Dr. Bill Thomas, a geriatric physician, introduced the Eden Alternative in 1991: he brought plants and pets into nursing homes to convert them from sterile, cold, institutions to something more closely resembling a home. A few years later, a consortium of nursing homes  calling itself the Pioneer Network was established to transform nursing homes through “culture change.” Their goal, as the network’s website puts it, is to help “care providers to transition away from a medical, institutional model of elder care to one that is life affirming, satisfying, humane and meaningful.” It goes on to say that the “Pioneer Network advocates for a culture of aging in which individual voices are heard and individual choices are respected.” 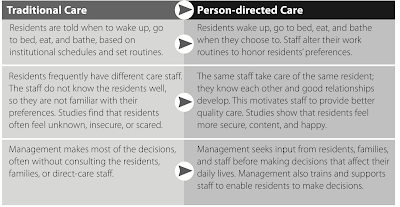 Implementing this model is not easy and some of the early ideas about how to go about transforming care were problematic. One idea, for example, was the “universal worker.” In a person’s home, responsibilities for caretaking are often shared by family members. Everyone can bring Mom a magazine or get her a cup of tea or escort her to the bathroom: there is no clearly demarcated division of labor. The hope was that replicating this model in the nursing home would allow greater flexibility—and shorter waits for residents—but nursing homes aren’t homes and a division of labor is often necessary because not all employees have the same skills. Translating the model into practice is especially challenging when residents have cognitive impairment and cannot make autonomous choices.
Nursing homes also face organizational challenges and regulatory challenges. I understand that. The Centers for Medicare and Medicaid Services, which dictates the terms of the state surveys that assess quality of care in nursing homes, also understands that it’s not easy to address quality of life as well as safety. But the resident interviews that are now a mandated part of quality assessment include questions about dignity and respect. 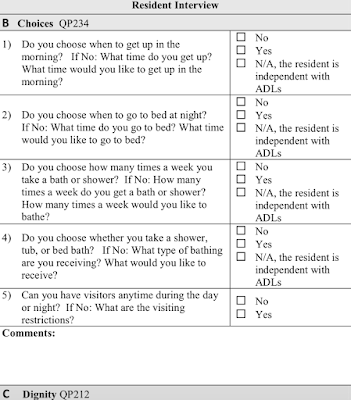 Mahatma Ghandi is widely quoted as saying that “a nation’s greatness is measured by how it treats its weakest members.” I would elaborate on this to say that a nursing home’s quality is measured by whether it treats its most dependent, vulnerable residents with respect and dignity. By this standard, many nursing homes today, including some that pride themselves on their care, have a long way to go. They would do well to consult some of the training guides assembled by the Pioneer Network and to follow the model of British nursing homes, that have launched campaigns to systematically promote dignity--including bathroom use--in nursing homes.
Posted by Muriel Gillick at 5:05 PM No comments: