When I searched the web for images of "caregiving" and "dementia," all I found was pictures of happy people: happy men and women who supposedly had dementia together with their happy family members or with hired caregivers: 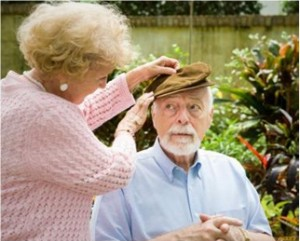 A staggering 52 million Americans care for an adult with disability or illness. They do all kinds of things for their relative, most often a parent or sibling, including taking on medical responsibilities. In addition, many have jobs outside the home, sometimes full time jobs. Caregiving takes a toll on their physical and mental health: it is associated with depression, isolation and even, in some studies, an increased risk of hospitalization and death. But a recent report that is a spin-off of the previously issued survey, HomeAlone, brings home the magnitude of the challenge for caregivers of individuals of people with dementia and difficult behaviors.

What makes taking care of someone with dementia and behavioral abnormalities so difficult is that these individuals are sicker than other adults. Along with behaviors such as pacing, wandering, spitting, refusing care, and sometimes smearing feces or hitting, they have heart disease and lung disease and other chronic illnesses. Figuring out that someone is feeling short of breath or having pain, the kinds of problems an older person with chronic disease is apt to develop, is very hard when that person cannot express what he or she is feeling. Once you’ve determined what the problem is and what you have to do to help, you have to struggle to do what's needed--things such as putting on an oxygen mask of giving an injection. And odds are, you will need to do a lot: fully 68% of those with dementia and behavioral problems have high blood pressure or cerebrovascular disease, 58% have some kind of musculokeletal disorder (most commonly arthritis), 45% have a cardiac problem, and 32% have diabetes.

As the caregiver for someone with dementia and behavioral problems, you are even more likely to need to do all those medical things that other caregivers report: wound care (33% of caregivers report doing this), medication management (85%), and operating medical equipment including home dialysis, a ventilator, or an oxygen machine (20%). The caregivers surveyed in the new report indicated that they found dealing with wounds and providing incontinence care among the hardest things they had to do—and that they had little or no training. They also reported a significant effect on their quality of life.

The report concludes with several common sense recommendations: provide respite for caregivers, offer training in responding to challenging behaviors, and educate clinicians to ask about caregiver distress. But I would add one more recommendation: help caregivers partner with clinicians to identify and manage common acute medical problems. Precisely because people with complex dementia (that is, dementia that causes behavioral issues) usually have other medical conditions, they are at high risk of being brought to the Emergency Department or being hospitalized. And the hospital is often a risky place for older patients with dementia, as I have often argued in this blog. Moreover, many patients with dementia probably would not want hospital care—if they could understand the inevitable downhill trajectory of their underlying condition, and if they had a viable alternative. Care at home is a viable alternative, but only if we educate caregivers so they are able to manage medical problems at home.

Giving caregivers the knowledge and skills to provide home medical care, would improve the quality of life of their relative with dementia, would likely alleviate their own stress by allowing them to feel in greater control, and would save money. So why aren't we doing anything to help?