The last year of life is often filled with trips to the emergency room, admissions to the hospital—frequently the ICU—and multiple visits to medical specialists. The treatments patients endure during that final year are burdensome, invasive, and costly. And in the end, they die anyway.

The problem with this kind of analysis is that it starts with the time of death and works backwards. But we don’t know in advance who is going to die. What about all the people who undergo aggressive treatments and don’t die? Isn’t it possible that they live longer, and sometimes better, because of all those doctors and hospitals? We will all die eventually and the very old will die sooner rather than later. The challenge is to predict how we will get from here to there so that we can make reasonable choices along the way. A new study in the BMJ offers a possible means of figuring that out.

We’ve known for some time that older people follow different trajectories near the end of life, and that a useful way to characterize those trajectories is by the extent of dependence and disability. A rough approximation of what happens is: 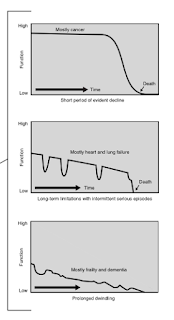 A more refined description suggests that there are five distinct “trajectories of disability” in the last year of life and that particular medical conditions—heart failure, cancer, or frailty—do not alone determine the path. The new study indicates that a powerful determinant of the path, independent of the medical condition that proves to be the cause of death, is hospitalization.

The authors had the opportunity to analyze data from an ongoing longitudinal study of 754 community-dwelling older people over the age of 70 who were initially independent in four essential activities of daily life: bathing, dressing, walking, and going from lying to sitting and sitting to standing. A comprehensive home-based assessment was conducted at baseline for every patient and then every 18 months for over ten years, as well as telephone interviews along the way. The evaluation included mental status, chronic conditions, and physical performance. Data was available on 582 decedents.

The striking result of the analysis is that without exception, the course of disability closely tracked hospitalization. No matter how the authors adjusted their analysis to account for possible confounders, the results remained unchanged. For every trajectory, being admitted to the hospital in a given month had a strong, independent effect on the severity of disability.

Now it’s possible that it was the acute problem leading to hospitalization, not the ensuing hospitalization, that caused the functional decline. The conclusion may be that we need to redouble our efforts to make hospital care for older people better, to try to improve over the modest progress we have made to date with ACOVE (acute care for vulnerable elders) units and fall prevention protocols. Or the conclusion might be, as the authors suggest, that patients admitted to the hospital with progressive, severe disability or with persistent severe disability, it would be best to suggest a palliative approach to medical care.

Whatever else we take away from this intriguing study, we should recognize what was perhaps obvious all along: it is often difficult and frequently impossible to predict from a single point in time what a given patient’s trajectory will look like. But if we consider two or three points in time and ask what the patient’s function is like over time, we can have a far better idea. Just as we cannot determine the slope of a line from just one point but we can calculate the slope from any two points—and we need more points to define more complicated curves—so, too, will we do better at prognosticating if we see patients as dynamic rather than static.
Posted by Muriel Gillick at 3:44 PM