My Mother Isn't Just a Fistula

Last week I posted the first half of a Q&A with Roz Chast, author of the wonderful book, Can't We Talk About Something More Pleasant? which was just released in paperback. Here is the rest of the interview:

MG: You also deal with death.  And you came to understand that dying can be a protracted process. You begin by saying you used to think that what would happen, as happened to “Mrs. McGillicudy,” was that she would feel unwell and take to her bed. She would stay there for 3 or 4 weeks, getting weaker. And one night she would develop a death rattle and after that, she would die. “The End.” But you learned that dying was “a lot more painful, humiliating, long-lasting, complicated, and hideously expensive.” I’m curious—before your parents’ deaths, had anyone you knew and cared about died? Do you think our lack of experience with dying contributes to our naivete?

MG: You do a splendid job of showing how preposterous we doctors can be when we propose “life-saving” treatment near the end of life. You describe how you brought your mother to a gastroenterologist who diagnosed a bowel fistula, an abnormal connection between the intestine and the outside world, and wanted to know if you wanted surgery (the only fix for this) because without the procedure, she might die. And you think: “wouldn't [surgery] be a little risky/painful/possibly insane for a 96-year old woman for whom sitting upright in a chair for half an hour…is a major effort?? And if she survives the operation, how does she manage the colostomy apparatus??? Have we lost all our marbles????” Did anyone other than the staff of “The Place,” the assisted living facility where your parents lived, and eventually hospice, evaluate what your parents could and could not do for themselves? Do you think this is as important as assessing the heart and lungs?

RC: Yes. Very much so. That we didn’t keep pretending that death is always completely avoidable. It made me think that the doctor wasn’t really seeing my mother as a person. She was just a fistula. 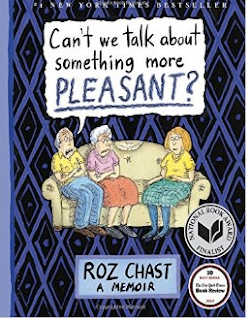 MG: At various points in the narrative, you talk about feeling guilty. You feel guilty about sometimes wishing your parents were dead, about spending so much money on their care, about spending time with your own family instead of them. And then near the end of your mother’s life, when she has a very devoted personal care attendant, you feel guilty that your mother “gets along better with Goodie [the aide] than with me.” It must have been hard to admit all these feelings. Was it cathartic for you to put all this down in images and dialogue?

RC: Not cathartic. I write and draw to remember. I’m not interested in catharsis. I’m afraid of forgetting.

MG: You tell the illuminating story of how your mother, after being enrolled in hospice care for some time while at the assisted living facility, suddenly improves. You acknowledge that you had “sort of adjusted to the idea that she was dying” and then—she was eating. Where in the adjustment process, you say, is “eating a tuna sandwich?” There are many aspects of the last stage of life that are hard on adult children—where would you rank the fact that it’s sometimes a real roller coaster?

RC: I’d say that in general, the process that goes on in extreme old age was a total mystery. And yes, it was much more up and down than I had expected.

Go forth and read!
Posted by Muriel Gillick at 10:04 AM