American medicine is best at taking care of people who have a single, very serious disease. We’re even better at taking care of them when they are in the throes of an exacerbation of that disease, when we can control everything that goes into their bodies and monitor whatever comes out, usually in the acute care hospital, often in the ICU. That means, for example, patients with severe heart failure who develop acute pulmonary edema, or people with leukemia who are in “blast crisis.” People who have multiple interacting conditions or one disease that isn’t necessarily fulminant but affects many aspects of their daily lives—those are the people we’re not so good at taking care of. And it turns out that these ill-defined groups of people not only get mediocre medical care, but they also cost the health care system a great deal of money.

It’s finally become clear to a number of influential health policy types that this group deserves attention—doing a better job caring for them could potentially improve health and save money. David Blumenthal, president of the Commonwealth Fund, recently published an article in the New England Journal of Medicine saying it was time we paid attention to “high need, high cost” patients. CTAC, the Coalition to Transform Advanced Care, just held a national forum on “advanced illness care,” advocating payment and delivery reform of the most vulnerable patients. CAPC, the Center for Advancing Palliative Care, has for a number of years promoted the use of “an added layer of support” for patients with “serious illness” throughout the course of their disease. But how can we identify just who it is who stands to benefit from the kind of care that all these groups recognize as crucial: integrated, coordinated, team-based, and patient-centered care?

Our neighbors to the north have long recognized the importance of frailty as a concept that gets at what’s common to people with multiple co-morbidities, patients with one advanced illness, and some patients who have dementia or mental illness. What’s unique about frailty is that it identifies patients who are vulnerable to external stresses. It doesn’t matter whether the vulnerability arises from the interaction between several different medical conditions or the effects of a single disease on many bodily functions; it’s the precariousness of their condition that makes frail people both difficult and costly to care for.

Dr. Kenneth Rockwood, together with colleagues at Dalhousie University in Canada, has developed a powerful Clinical Frailty Scale that categorizes patients based on a mixture of disease burden and function. Studies show the Clinical Frailty Scale can predict decline and mortality among community dwelling older individuals; it can predict unplanned hospitalization and death in outpatients with cirrhosis; and it can predict length of stay in older patients admitted to the acute medical service of a general hospital. But a Google search fails to turn up a single article in which the CFS is used in a US hospital. It’s been tried in Australia. It’s used in Canada. But not the US. Why not?

Let’s have a look at the CFS. I think it offers some clues: 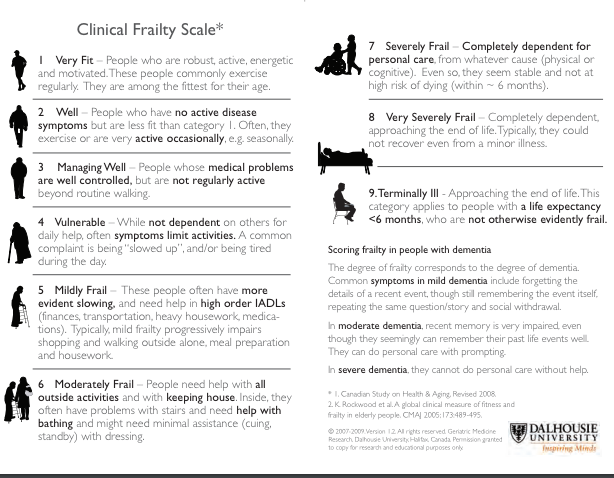 Two observations about the scale. First, although the outcome is quantitative (every patient gets a score between 1 and 9), the assessment that goes into determining the outcome is fundamentally qualitative. Second, and not unrelated, there’s no way the score can be computed from information already entered into an electronic medical record. That’s because the rating is not based on things like the serum albumin or the mini-mental score. It’s based on one person, a clinician, deciding which of 9 very short, illustrated descriptions best fits another person. There’s nothing complicated about the process—a good primary care physician be sufficiently knowledgeable about his patient to determine the answer without asking doing any kind of special evaluation, and even a not-so-good primary care physician should be able to find out enough to choose the best description after 1 or 2 minutes of questioning. But introducing the CFS into the practice of medicine in the US would require physicians to be aware of their patients’ level of functioning in everyday life, not just the functioning of their individual organs. And it would require accepting the notion that sometimes qualitative reasoning trumps the quantitative. Both concepts are alien to standard American medicine.

Frailty is the final common pathway, whether you're frail because of dementia or metastatic cancer or Parkinson's disease or some combination of arthritis, diabetes, and COPD. So let’s borrow from our northern neighborhood and begin using the Clinical Frailty Scale. It’s really very simple.
Posted by Muriel Gillick at 1:54 PM