The Price of Tom Price

The Senate confirmed Tom Price (R-Georgia) by a 52-47 vote as the new Chief of the Department of Health and Human Services this week. Much of the debate focused on Price’s ethically and legally dubious stock purchases. He bought stock in a medical device company--and then promptly authored a bill to increase Medicare reimbursements for that company’s products. Attention to Price’s many apparent conflicts of interest are important but should be taken up by the SEC as part of an investigation of insider trading. Unfortunately, with all the attention paid to financial shenanigans, there was correspondingly less attention paid to what Tom Price would try to do to Medicare and Medicaid.

In fact, there’s a great deal of speculation about what Tom Price believes or would do, and less reliable information about what he wants to do. What we do know is that he is an orthopedic surgeon (one of the medical device companies he invested in, and which stands to benefit from legislation he favors, is Zimmer, a leading manufacturer of artificial hips and knees) who strenuously dislikes the recently introduced “bundling” of payments for joint replacement surgery under Medicare. According to this plan, which so far seems to be lowering costs without adversely affecting quality, Medicare pays a single amount for all care involved in replacing a hip or knee: hospital care, the surgery itself, and post-surgical care for 90 days. Providers whose care costs less than the target amount stand to be paid a bonus and those whose care care exceeds the target amount are hit with a penalty. Programs such as this one are piloted by the Center for Medicare and Medicaid Improvement, an agency authorized by the Affordable Care Act--and Price has specifically tried to de-fund the CMMI.

What we know is that Price was one of the authors of “A Better Way,” the House Republican outline for replacing the ACA. This document strongly favors “premium support,”  a voucher program that would give patients a fixed amount of money with which to purchase a (private) health insurance plan. While this might simply be what Medicare already does with respect to Medicare Advantage programs, the current alternative to fee-for-service Medicare, it raises the question both of whether the vouchers could be used to buy a conventional Medicare plan and also how much control CMS would have over what must be included in eligible plans.

We know that Price favors repeal of the ACA, which provides for free coverage of preventive services such as colon and breast cancer screening, and which has reined in Medicare costs by reducing payments to hospitals, skilled nursing facilities, and Medicare Advantage plans. Undoing the ACA has the potential to reverse all these trends.

Finally, we know that Price is in favor of converting Medicaid to a block grant program—essentially turning it over to the states. Medicaid already demonstrates enormous state to state variation, with the contribution and standards of the federal government standing between a robust insurance plan and a total farce in states such as Alabama and Mississippi. Right now, 9 million of the 46 million Medicare enrollees are dually eligible—they receive both Medicaid and Medicare.

A far larger proportion of older, eligible voters go to the polls on election day than any other group. In 2016, voter turnout among the 65+ set was close to 60 percent; among those 18-29, it was under 20 percent. 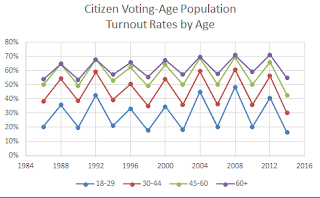 Older people count in the eyes of our elected officials, if for no other reason than that they vote. Maybe those enrolled in Medicare didn’t realize that a Trump administration would mean for them. But with the appointment of Tom Price, we know a little more. It's time for older people to speak up for Medicare.
Posted by Muriel Gillick at 5:33 PM