Who Will Care for Me When I am Old?

In an important article in the NY Times this week, journalist Paula Span points out the dire consequences to the nursing home industry if the Trump administration ends “temporary protective status” for refugees from countries such as Haiti and El Salvador. These countries are where many of the poorly paid, hard-working, desperately needed aides who care for nursing home residents come from, especially in certain states including New York, California, and Florida.

But there’s even more at stake in the immigration debate than the devastating but short-term problem relating to temporary protective status. Trump is promoting what he calls “merit-based” immigration: determining who can move to the U.S. with the hope of ultimately becoming a citizen based on what they will “contribute” to American society. That’s not necessarily a bad idea—although it’s important to preserve the distinction between refugees and immigrants, where refugees see the U.S as a haven from the discrimination and persecution that they face in their home countries, and immigrants see the U.S. as a land of economic opportunity as well as political freedom. But if we are going to accept immigrants based on their potential benefit to American society, who will decide what counts as a benefit?

The U.S. does not just need brilliant scientists and engineers. And in fact, robbing other countries of their elites may be destabilizing for those countries and not, in the long run, beneficial to the U.S. The U.S. needs unskilled workers such as nursing assistants—people who are in short supply at present and the need for whom will soar in the coming years as the number of people over age 85 (the group in greatest need of personal care) triples.This past year, 45,000 nursing assistant job openings went unfilled. These are not jobs that Americans are clamoring for: the pay is poor (the median wage in 2016 was $12.34 n hour), injury rates are high, and opportunities for advancement are meager. 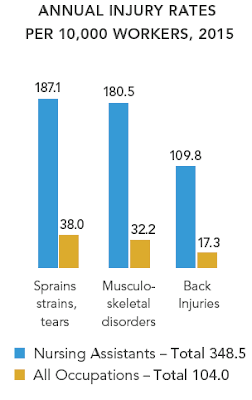 If standard economic models were applicable to this situation, we would expect wages to rise, attracting more workers. But nursing home revenue is determined in large measure by how much state legislatures allow Medicaid to pay nursing homes, and financially strapped states are not increasing their Medicaid budgets. As a result, nursing homes will compromise patient care or close before they increase wages.

Who does take a job as an aide in a nursing home?

The 600,000 people who take care of some of the oldest, most vulnerable members of our society are largely black women; 20 percent of them were born outside the U.S.

If immigration reform means entry to the U.S. will be based on who has the most to give, we better make sure that poorly educated but caring and conscientious women are our priority.
Posted by Muriel Gillick at 3:13 PM