British researchers recently projected care needs of the very old.  We would do well to pay attention to their analysis—or, if we think Americans are substantially different from their British counterparts, then we should replicate the analysis with our own data. Their study concludes that the number of very old people (over age 85) who will be highly dependent will double by 2035. This despite a marked decline in the anticipated rate of dementia and the growth of the population who remain fully independent. The seeming paradox arises from an increase in the number of comorbidities that the very old will have and the interaction between multimorbidity and dementia. In short, if you do survive to extreme old age and if you are one of the still substantial number of people who develops dementia, you probably will also have several chronic diseases. The combination spells dependence, where the study authors define high dependency as requiring 24-hour care, medium dependency as needing help at regular times daily, low dependency as needing help less than daily, and independence as free from care needs.

If we look at the proportion of all 85+ year-old men who were highly dependent in 2015, we can see that it was low then and it will have fallen further by 2035. Very old women are somewhat worse off than men today and the discrepancy will increase by 2035. Since the total number of octogenarians will rise considerably over the next 20 years, the total number of dependent, very old men and women will be larger than it is today--in the UK, the numbers will double. 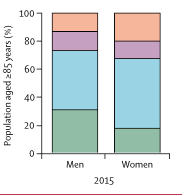 If, instead, we look at the number of additional years that people who turn 65 can expect to live, we have a more nuanced view. Men who turned 65 in 2015 can anticipate another 18.7 years of life, of which 11.1 years will be spent entirely independent and 1.4 years will be in a state of high dependency. A man who turns 65 in 2035, projections suggest, can expect another 22.2 years of life, during which he will spend 15.2 years independent and only 1.1 years dependent. 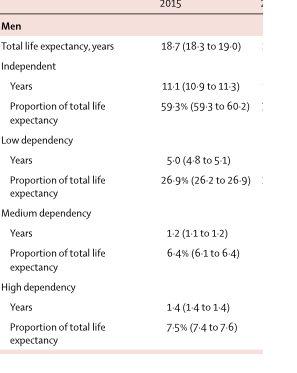 Women who turned 65 in 2015 can expect to live another 21 years, during which they will be independent for 10.7 years and very dependent for 2 years. The next generation, which turns 65 in 2035, will have a life expectancy of 24.1 years and will independent for 11.6 of them. Unfortunately, the length of severe dependency will increase to 2.7 years. 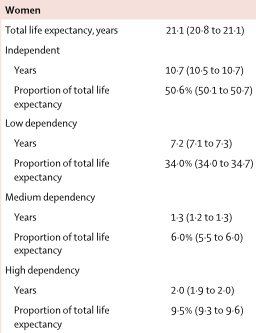 The implication of all is that we will need a huge increase in the number of caregivers to accommodate the needs of the very old. Unless we are far more successful in rolling back the rate of chronic disease than we have been to date (cardiovascular disease, diabetes, and stroke are the leading offenders) and can also dramatically cut the risk of dementia, we need to start planning now. We should encourage more people to become nursing aides. This will involve raising the pay and enhancing the status of the job. We will also want to seriously consider increasing immigration to fill the needs of the oldest old. And we should not assume we are better off than our British counterparts: on the contrary, older Americans today experience more sickness and disability than our European counterparts and our health care system devotes less attention to social than medical problems.

Posted by Muriel Gillick at 2:29 PM