Quite by accident, I stumbled upon Kurt Eichenwald’s memoir in the new book section of my local library. I remembered the author from his work as an investigative reporter who uncovered massive white collar crime. His book, The Informant, about just such a scandal, became a best seller and a movie starring Matt Damon. When I realized the new work had a medical theme, I was intrigued; when I discovered that much of the story unfolded at Swarthmore College, where Eichenwald had been a student, and where I had been a student some years earlier, I decided I had to read it. 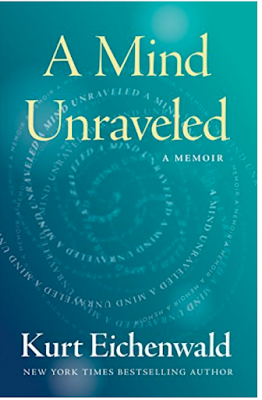 At first glance, you might think that A Mind Unraveled has no relevance for geriatrics. The diagnosis and misdiagnosis of Eichenwald’s temporal lobe epilepsy as well as the shockingly misguided treatment by ostensibly reputable physicians all took place in the early 1980s, when the author was a teenager or in his early twenties. Unfortunately, the book’s messages are all too relevant for older patients today. Distilled to their essence, those messages are first, that not all doctors are created equal and second, that communication is key. The long, complicated, and riveting story of lying, arrogance, and sheer incompetence that led to those conclusions is worth reading. I read the entire 380-page book in a single weekend, devouring it much as I would a spy thriller.

The not-all-doctors-are-created-equal conclusion is particularly relevant to older individuals because even physicians who are competent within their sphere of expertise often have little knowledge or understanding of geriatric issues. In my last post, commenting on recent data indicating that despite all we have learned about preventing falls, older people are falling—and injuring themselves—at higher rates than ever before,  I suggested that a critical weakness of prevailing fall-prevention systems is that they hinge on the knowledge and interest of physicians, both of which are often absent. Identifying a physician who is a good diagnostician, a kind person, and who actually knows about falls, confusion, polypharmacy, cognitive impairment, incontinence, and other common geriatric syndromes is imperative, particularly for frail older people. Finding such a person can be challenging, and being confident s/he has the requisite expertise is also challenging. Board certification in geriatrics is one indicator; working with a multidisciplinary team including a nurse practitioner is another; word of mouth is a third. Trial and error may prove the only way to be certain you have found the right person: come to your first appointment with a checklist of topics the physician should be sure to address such as functional status and advance care planning. If the physician doesn’t address those issues during an annual physical exam, absent a compelling need to focus on an acute medical problem, it’s probably time to find someone else.

The communication-is-key conclusion is relevant to all physician/patient interactions, but is especially important for older people, many of whom have hearing problems or cognitive impairment. It took multiple tries before Eichenwald found a neurologist who understood that given that all the medications used in the treatment of epilepsy have potential side effects, choice of which drug to use involves balancing risks and benefits. The patient’s preferences, which side effects s/he finds tolerable in exchange for how much benefit, are essential in making a choice of drugs. For geriatric patients, the role of preferences is often paramount in medical decision-making. The assumption that the goal of treatment is cure may simply not apply to an 88-year-old with multiple medical problems; maintaining or bolstering his ability to remain independent may, for example, outweigh the benefits of disease eradication. Or cure may be irrelevant, as with some cases of prostate cancer, if the odds are that the patient will die of some unrelated problem long before his prostate cancer metastasizes, but the risk of surgical treatment causing incontinence or impotence now is great.

Regrettably, the dismissive attitude of Eichenwald’s physicians to him as a person are all too familiar to many older individuals. Just as many of the neurologists in A Mind Unraveled failed to take their patient seriously as a person with anxieties, concerns, and understanding, so too do physicians often neglect to treat their older patients with respect and sensitivity. To find a physician who listens you cannot rely on board certification. Word of mouth can help (if the mouths belong to people you trust, preferably people whose personalities and medical problems are similar). But once again, trial and error may be the best path. Don’t hesitate to use yourself as a barometer. Only you can gauge whether you “clicked” with the physician. Just as you should be reluctant to listen to the shoe salesman who assures you that those very uncomfortable shoes will improve with time, you should ignore at your peril the internal voice that tells you to stay away from a particular physician.

I would like to believe that Eichenwald’s experience was highly unusual. Most physicians who treat epilepsy know that a negative EEG doesn’t mean there’s no seizure disorder (but the presence of characteristic electrical changes indicates there is). Most physicians would monitor blood counts when prescribing a medication that has a “black box warning” from the FDA stating that the drug can cause life-threatening bone marrow depression and that regular blood tests are required. No competent clinician would offer a diagnosis of a brain tumor based solely on a few of the patient's behavioral quirks. And I haven’t even touched on the arrogance and prejudice that animated members of the Swarthmore administration, leading to their expelling young Eichenwald—and then readmitting him when faced with the prospect of what for them was an unwinnable suit charging civil rights violations (in particular, violation of Section504 of the Rehabilitation Act of 1973 requiring educational institutions to meet the needs of students with disabilities).

We can only hope that the behavior described in this memoir is extraordinarily rare in colleges and universities today. But we do know that just as systematic racism persists today, so too does systematic ageism. Caveat emptor!
Posted by Muriel Gillick at 11:35 AM