Nearly six months into the pandemic, we ought to know the important risk factors for serious illness or death from Covid-19. Whether because of poor record-keeping, lack of international cooperation, or sloppy statistical analysis, the information until now has been limited.

The only consistently observed risk factor for both severe illness and death has been older age, with age greater than 80 representing very high risk. Now, thanks to the existence of widespread, compatible electronic medical records in the British National Health Service (NHS), we have some useful data.

The study, published early on line in Nature Reviews, compares British patients who died of Covid-19 with all other British patients who are cared for in a group practice that used the necessary software (approximately one-third of the population). By using “a secure analytics platform inside the data centre of major electronic health records vendors, running across the full live linked pseudonymised electronic health records,” and after excluding people under age 18 and those with less than a year's worth of data, the investigators were able to collect health information on over 17 million individuals, including just under 11,000 with Covid-19 related deaths. The results confirm age as the single most potent risk factor, with a small number of other major risks. 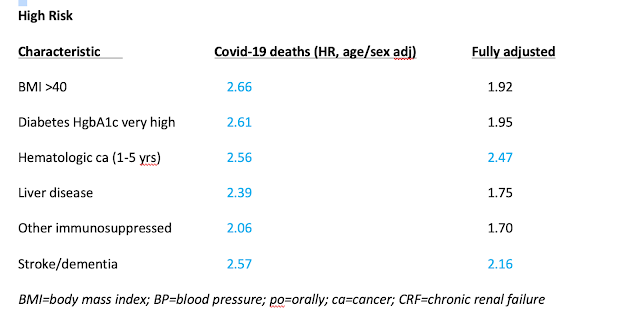 The important difference between these charts and previous attempts at quantifying risk is that the hazard ratios reported have been age and sex-adjusted and have been further adjusted for other potential confounders along with age and sex.

The conclusion from this analysis is that when we consider the age- and sex-adjusted hazard ratios, there are only four very high-risk conditions: old age, a hematologic malignancy diagnosed within the previous year, severe kidney impairment, and organ transplantation. Within the old age categorization, the hazard ratio goes from 8.62 to 38.29 as the age increases from 70-79 to 80 and older (the reference group is people aged 50-60). The only medical condition that comes close to this magnitude is organ transplantation, with a hazard ratio of 6.

Another handful of conditions are in what I have classified as high-risk: obesity with a BMI of 40 or greater, poorly controlled diabetes, stroke or dementia, a hematologic malignancy diagnosed between 1 and 5 years earlier, liver disease, and other forms of immunosuppression. Incidentally, four out of six of these conditions drop out if we look at the “fully adjusted” column.

It’s worth noting some of the chronic conditions that were not associated with increased risk. High blood pressure, as I had previously suggested by comparing the rate in the very ill Covid-19 patients with the rate in the general older population, does not appear to be a risk factor. Mild to moderate asthma, defined in this study as someone with asthma who did not use oral steroids within the previous year, is also not a risk factor.

It’s also worth noting that the CDC has issued its own guidance about risk factors for Covid-19. Their conclusions, while overlapping with the NHS data, differ in important ways. Most important, their methodology differs. The CDC, lacking a domestic large, comprehensive data base, is forced to draw on evidence from small case series, cohort studies, and some meta-analyses, as well as a much earlier preliminary report from the NHS. The new NHS data, rigorously obtained and meticulously analyzed, should be seen as the gold standard.
Posted by Muriel Gillick at 10:03 AM