Vote: Your Health Depends On It

Earlier this month, the prestigious New England Journal of Medicine took the unprecedented step of publishing a political position paper in the name of the entire editorial board. Entitled “Dying in a Leadership Vacuum,” the journal urged Americans to vote out our “current leaders.” They based their argument on the mismanagement of the Covid-19 pandemic by America’s political leaders, naming no names but asserting that “when it comes to the response to the largest public health crisis of our time, our current political leaders have demonstrated that they are dangerously incompetent. We should not abet them and enable the deaths of thousands more Americans by allowing them to keep their jobs.”

While the disastrous handling of the pandemic is the most egregious failing of President Donald Trump, Senate Majority Leader Mitch McConnell, and others who could have made a difference, it is not the only area where our leaders promoted misguided health care policy—with disastrous consequences. I argued in an earlier post that “Trump is Bad for Your Health.” Today, as we approach the end of election season, I am going to spell out why Trump, Pence, their appointees (such as Alex Azar, Secretary of Health and Human Services), their Republican supporters in the House and the Senate, and fellow travelers in state governments (both legislators and governors), will be bad for the health of all Americans, older Americans in particular. It’s not just the pandemic performance that’s the problem: it’s the limitations on access to insurance, the roll-back of regulations that protect the environment, and the attacks on Medicare and Medicaid.

Limiting access to health insurance: One of the major “accomplishments” of the Trump administration and endorsed by Republican legislators is its relentless attacks on the Affordable Care Act. The administration eliminated the “mandate,” the tax penalty on those who do not purchase health insurance. The mandate is an important part of what allows the ACA to work without driving up the cost of insurance: the fundamental principle of insurance coverage is that it works by distributing the risk over a large population; if people can opt out, only those who are sick will remain insured, raising the cost for everyone. And indeed, with the end to the mandate, health care costs have risen—making this a leading issue for the electorate, young and old.

Rollbacks of environmental regulations: As of October 15, according to the NY Times, the Trump administration has rolled back or is in the process of rolling back almost 100 environmental regulations. Twenty-one involve air pollutants (plus 5 in progress); six involve water pollution (plus 3 in progress); and six involve toxic substances and safety (plus 2 in progress). Estimates are that these changes will result in thousands of extra deaths per year, affecting older people as well as those who love and care for them. 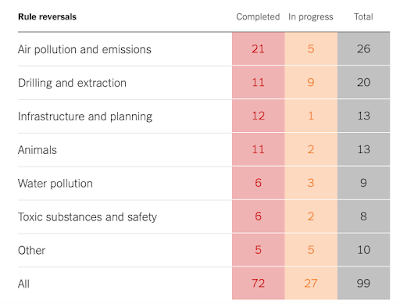 Attacks on Medicare: just this month, Trump issued an executive order designed to promote the privatization of Medicare. Ostentatiously and misleadingly titled “Protecting and Improving Medicare for Our Nation’s Seniors,” the order calls for shifting costs to beneficiaries, limiting choice of providers, and moving more and more patients into the private sector by joining Medicare Advantage Plans.

Limiting Medicaid: among the many ways in which the Trump administration has undermined the role played by Medicaid in providing health care is a rule allowing states to cap Medicaid spending for poor adults. Through its endorsement of what are essentially block grants, the federal government is enabling states to reduce health benefits for those who gained coverage to Medicaid thanks to the ACA. In 2018, 12.2 million people were dually eligible for both Medicare and Medicaid. In addition to opting to cut back benefits under Medicaid, states have the option of refusing to allow Medicaid expansion. This is an approach authorized by the ACA that enables the near-poor to receive health insurance through Medicaid. To date, the governors and legislatures of 39 states (and the District of Columbia) have accepted Medicaid expansion; 12 states have not. 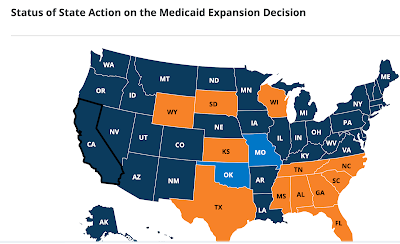 Regardless of where you stand on issues such as taxes, immigration, and reproductive rights, whatever your views on foreign policy, your health and that of your children and grandchildren is too important to allow supporters of Trumpian policies to remain in office. Whether they are found in the federal government (as senators, representatives, or in the executive branch) or state government (as legislators or governors), vote them out. Do it now.

Posted by Muriel Gillick at 5:11 PM