My 95-year-old mother has been using a computer for email since our then teenage son arranged to gift her his old computer so he could get a new one. That was 25 years ago. But like most people in her age cohort, she has never been comfortable with the technology and has trouble learning anything new related to the computer. The difficulty has gotten worse over time along with her memory. But when Covid hit and visits to the independent living complex where she lives were restricted and then eliminated, the limitations of a landline telephone became all too evident. If my mother could make and/or receive video calls, she could communicate with me, with her three grandsons in California, and with friends. But using the video technology proved to be an endless source of frustration. We tried FaceTime, we tried Skype, we tried Zoom. Nothing worked.

Now, after months of trial and error and refining the approach, I’m pleased to report that my mother can receive—and sometimes initiate—FaceTime calls. I’m so pleased that I’m going to use this blog post to describe in as much detail as I can recall every step necessary to accomplish this feat, suspecting as I do that others may find themselves in a similar predicament. 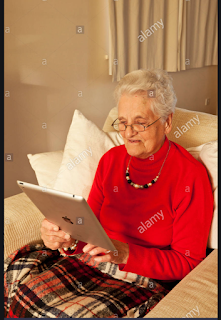 Step 1: Choose an appropriate device. I purchased my mother a new 10.2 inch, 32GB iPad. It’s portable, so she can use it while sitting in her favorite recliner. The screen is big enough so that people’s faces appear almost life-size and photographs are easy to see. In principle, Apple products are user-friendly, though as it turned out, my mother is a genius at outwitting the human-computer interface gurus at Apple by coming up with ways to make the system fail. Nonetheless, I think the iPad was probably as good a choice as any and better than some. The rest of the steps below apply primarily to an iPad.

Step 3: Disable password protection for turning the device on. This may be a bit risky, but my mother was having trouble remembering her password. I “enrolled” her in touch ID, but she usually managed to put her finger in not quite the right place, so it did not work reliably. Nothing is more frustrating than being unable to even turn the thing on.

Step 4: Go to Settings, Accessibility, Assistive Touch. This setting allows my mother to use the iPad even though she has poor fine motor control and touches the screen erratically.

Step 5: Label the home button. I stuck an arrow on either side of the home button to help my mother find it. The device is designed with a very slight indentation signaling the home button, so slight that it’s hard for 95-year-old eyes to see. ➡️ ⏺ ⬅️

Step 6: Make sure Siri is disabled. I initially thought it would be easiest if my mother used Siri to make calls, simply saying “hey Siri, call Muriel Facetime video.” Wrong. She would leave out “FaceTime” or leave out “video” or forget to start with “hey Siri.” She felt compelled to speak in grammatically correct sentences, as though Siri would understand her better that way. When I left Siri enabled, just in case things changed, I found that my mother would sometimes hold the home button down too long and inadvertently invoke Siri, who would helpfully inquire “may I help you?” Having her device suddenly speak really rattled my mother.

Step 7: Put only the most essential icons in the dock. For my mother, this includes the icon for her email, Safari, and for FaceTime video. I’ve recently added the photos icon.

Step 8: Declutter the screen by putting as many of the obligatory icons, the ones you can’t get rid of, on the next screen, not the screen that is opened when the device turns on.

Step 9: Put the handful of phone numbers (with associated names) that are most likely to be used in the FaceTime contacts screen. This way, when my mother taps on the video icon, she will see 4 or 5 names and can choose which one she wants to call. Sometimes she taps on the wrong spot and calls the wrong person, but at least she’s not accidentally going to call Social Security or the Boston Globe, just a different family member from the person she intended.

Step 10: Practice! When visiting my mother, I would get her settled in her recliner with the iPad and call her from another room. For a while she had trouble with the command “slide to answer.” I finally figured out that she was carefully sliding her finger along the words “slide to answer” and assiduously avoiding the green virtual button to the left of the words. Unless she accidentally touched the button, she failed to answer the call. Now I regularly remind her that she needs to slide the button and it works like a charm. Another aspect of practicing is using the system regularly. At one point, my mother was doing great and then we didn’t make any video calls for a few days, by which time she had forgotten about sliding the button rather than the words. Making or receiving a call once a day is probably a good idea.

Sounds simple, doesn’t it? Since it literally took me months to figure this out, I thought I’d pass along what I learned, in case these steps can help someone else.

Posted by Muriel Gillick at 5:37 PM